In October 2012 Tronie received the Prime Minister’s Award (in recognition of outstanding support for Excellence in Early Childhood Education). These awards were presented in Ottawa but unfortunately, Tronie was unable to attend the ceremony. However, the certificate was presented to her at a Nightingale Festival here in Victoria in December.

In May 2011 Tronie received an Award titled ‘Child Advocate of the Year’ through the success by 6 Early Years Award held in Victoria and Nightingale Preschool and Junior Kindergarten was nominated the “Favourite Preschool of the Year” at the same event.

In May 2008 Tronie was one of 15 Early Childhood Educators who were selected throughout British Columbia to receive the “Child Care Awards of Excellence”. The award was the first of its kind in British Columbia. 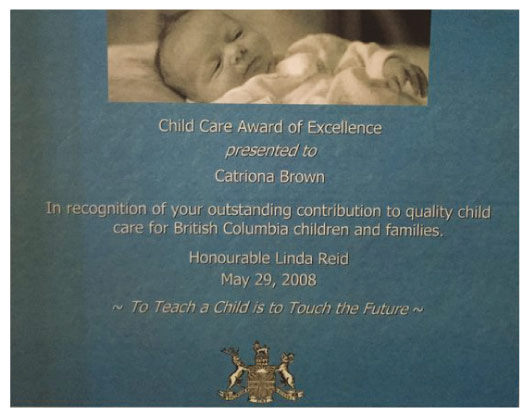